Today let me introduce you Max - a head of the Army of the Sun clan.

Ambiguous handling of rules often leads to fatal consequence. In order not to make the wrong move and get a huge penalty, you can use (on individual fear and risk, they are not advice from administration after all) advice of experienced players, which we have put together in this article using questions from the ‘’Queries and help’’ branch of the forum.

Necromancers one of the oldest gameís factions. Our elders, pioneers. All these years that had passed until the introduction of the alternative, they experienced the biggest problems with magic factions, with those using chaos magic, in particular. These detested ëístoolsíí, fluttering across all of the field, nasty dark elves, eternally standing in defense, destroying everything around with enhanced fireballs and meteorite rains... They are joined a bit later by a guard of demons with upgraded Hellfire, adding to the group of tough-to-kill builds.


Yes, the present classic necromancers are hostages to EWL-balance. They bear quite and quite good chances against combatants of all types. They can be sharpened to a point where the unlucky fighters will simply go to their own death, like peas against a wall... However, this shows their legendary weakness to wizards.


And so... It happened. Two and a half months ago players got the chance to get acquainted with unholy necromancers (UNs). In short, the new alternative is a leader in exterminating any faction and build that has thought to use devastating magic on the battlefield. Be it a classic chaotic or a more rare nature build, on the battlefield they are destined to gain a loss should they ever come in contact with an UN, no matter what build the latter chooses.


It seemed that here it is, the complete fortune! For years necromancers have been nagging about cutting wizards, asking to give them an offensive or a luck branch in their talents (hooh, they got both of them...) and at last acquired such a ëímegaweaponíí. You see, whatís funny is that in the introduction of previous alternatives, there was the wildest hype and dominance of the alternative factions. Only the lazy didnít go fighting battles with the brand new darkness demons or the holy knight. On the other hand, the UN wasnít that popular and isnít used very much even to this day. Why did this happen? We will try to find that out.


In this article, pure and hybrid nature builds (combining battle stats and high level magic) will be discussed. If you are interested to have a look at a wide range of battles, gain experience playing as an UN or against UNs, based on achievements of other players, you came to the right place.

New UCIs (press the images below to watch animation): 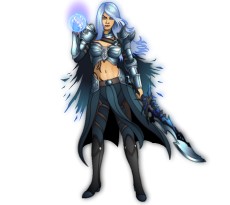 What’s in your transparent backpack?

Some long time ago, or, for someone, recently, every one of us had to pack a school backpack. In the morning, or in the evening, independently, or after a long period of parents’ prodding. Absentmindedly forgetting the agenda, or, purposefully, the gym clothes. By an old soviet habit, someone named their backpack a briefcase, forgetting that a briefcase is carried using only one hand, not on the back. Another person had a satchel, imitating the military and provoking the classmates to do jokes together. Everyone had their own memories. Where am I going with this, you may ask?

This. It was on September of last year. Our administration, possibly inspired by the students hurrying to school, allowed the heroes to yet again ‘’pack their backpacks’’. They introduced a new slot for ammunition after the Rayzar’s Challenge – a backpack, to be more specific. Truth be told, it cannot be packed in the ‘’school’’ meaning of this word. It can only fit in one thing and not just any thing, in fact. This article will be about the artifacts made for the newly made ammunition slot.

more » What’s in your transparent backpack?

Click on the first image to watch animation, due to technical reasons animation on the second one is temporarily inavailable.